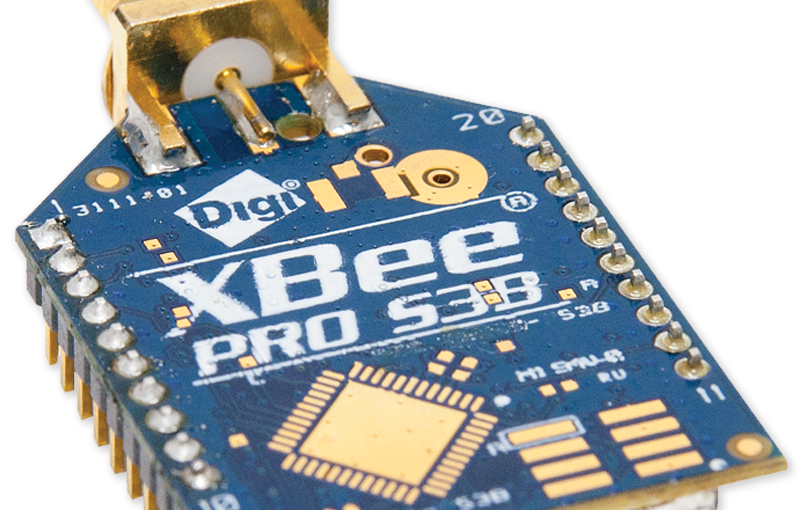 See here on the SparkFun XBee Guide for the ranges.

Note that it is not possible to use the XBee 900 in the UK, EU and other parts of the world where the 900 MHz band is reserved. In those countries the 868 MHz version must be used – see the blog XBee 868.

Unsure why some have a SMD IC on the top and some do not? The SMD IC is an AMTEL AT91SAM7S64, a SMART ARM®-based SAM7S64 is a member of the SAM7S series of flash microcontrollers based on the 32-bit ARM7TDMI® RISC processor.

According to this Digi Modules page, the SMD variants are the 868 range, whereas the others without the SMD are the S3B. I am not 100% sure if I believe that though, especially when it comes to Chinese clones, plus the SparkFun XBee Guide seems equally confused, as all of the 900MHz modules are shown with the AMTEL IC mounted.

Unsure which XBee to pick based on the connector? Worried about the durability of the U.FL connector? Wondering whether RP-SMA is more rugged? Should you use which one for connecting to an external antenna outside the enclosure containing the XBee? This RF Connector Buying Guide has some limited information:

The Hirose U.FL (Known by a variety of names including AMC, UMCC, IPX) is the smallest RF connector that we carry… and it’s tiny! A mated connection only stands 2.5mm high! U.FL is good up to 6GHz and is usually used in applications where nothing else would fit. Often times they’re used in laptop WiFi cards and embedded systems. Male U.FL connectors are surface-mount parts soldered directly into the host. Female connectors are usually manufactured as a cable assembly with a high-quality 1.32mm doubly shielded cable. Female U.FL connectors rely on pressure from the shape of the connector to keep it secure. This does form a very tight ‘snap in’ connection. As a result, female U.FL connectors will wear out after a several connections and will need to be replaced as they aren’t generally intended to be connected and disconnected multiple times.

So, the male U.FL connector on the XBee is safe, you will just need to replace the U.FL cable and female connector if you unplug it often.

The XBee modules with RPSMA would need to be screwed into the side of the enclosure, which would then require careful planning and positioning of the XBee DIP connector and the PCB that the DIP connector is on. For greatest flexibility the U.Fl would be the better choice.

Can I fit a standard wi-fi antenna to an XBee? No! The reason that Digi were able to produce the XBee, was that high gain antennas would not be available, which would not comply with local authority radio regulations because otherwise they would not be granted a license/permission to manufacture. From the Wikipedia entry for the SMA connector:

Reverse polarity SMA (RP-SMA or RSMA) is a variation of the SMA connector specification which reverses the gender of the interface, as shown in Figures 1 and 2. The term “reverse polarity” here refers only to the gender of the connector’s contact pin, not in any way to the signal polarity. The female RP-SMA connector has the same external housing as a standard or conventional female SMA connector, which consists of an outer shell with the threads on the outside; however, the center receptacle is replaced by a male pin. Similarly, the RP-SMA male has threads on the inside like a conventional male, but has a center receptacle instead of the male pin in the middle.[8][9] Normal SMA connectors are incompatible with RP-SMA connectors.

Because they were not readily available, RP-SMA connectors have been widely used by Wi-Fi equipment manufacturers to comply with specific local regulations, such as those from the FCC,[11] which are designed to prevent consumers from connecting antennas which exhibit gain and therefore breach compliance. The FCC considered that the RP-SMA was acceptable in preventing consumers changing the antenna; but by 2000 it regarded them as readily available,[12] though delaying its ruling indefinitely.[13] As of 2013, leading manufacturers are still using RP-SMA connectors on their Wi-Fi equipment.[14

You may have seen on eBay different 900MHz devices, some at 50mW and some at 250mW. So, what is the difference besides the power consumption? Good question. The range is obviously one factor, data rate could be another.

In Europe it is necessary to use 868MHz, in lieu of 900MHz, as the 900MHz band is reserved for GSM communications, see 900 MHZ AND 2.4 GHZ SOLUTIONS for some details.

Note, however, that the 868MHz XBee devices do not have the full functionality of the Series 2 Pro XBees, see Connecting 2 XBee pro 868 (s5) to parse the state of a DI.

The XBee PRO 868 does not support direct DIO line passing. It is only supported via remote AT commands and the API interface.

Also, you can not use the 2.4GHz antennas, 900MHz antennas are required, see Meshlium As Gateway For Xbee Pro 868. See also Xbee Pro 868 Antenna, and Need to buy antenna For xbee pro 868, although the answers to both of these questions suggest 2.4GHz antennas(?)

From Reference book for XBee S3B radios [closed], this question was asked:

Is there a reference book/guide for advanced use of the XBee S3B radio modules from Digi?

(Yes, I already have the datasheet, but I want to know if there is another good reference for this.)

Digi has a User Manual and a Development Kit Getting Started guide on the S3B Documentation Page.

I would expect some of the content of Rob Faludi’s Building Wireless Sensor Networks would apply to the S3B as well.

What interests you in the S3B modules as opposed to the more-common ZigBee-compatible 802.15.4 S2B modules?

The answer to the last question was:

my interest is in the long range of the modules.