Still following on from Service please!, and after editing Power Up!, I produced this standalone blog about BECs, UBECs, SBECs and ESCs.

A Battery Eliminator Circuit, or BEC, is basically a step down voltage regulator. It will take your main battery voltage (e.g. 11.1 Volts), whose high voltage is used to power motors/rotors, and reduce it down to ~5 Volts to safely power your receiver, flight controller and servos.

The advantages of a BEC are that if you are flying electric, a BEC is better than a battery pack in nearly all cases, as it will detect when the battery charge is getting low and divert power from the motors to steerage, enabling the pilot to land the RC airplane, rather than have it hard crash.

Some ESC devices (see section on ESC below) come with BECs contained within them.

Two are two types of BEC:

What does UBEC mean?

An Ultimate (not Universal) Battery Eliminating Circuit (UBEC) is a ‘switch mode’ DC regulator and is the same as a UBEC. A regular BEC is a linear device, and so will dissipate a lot more heat than a UBEC/SBEC.

The reason is that the ‘U’ in UBEC stands for ‘Ultimate’ and not ‘Universal’ is that UBEC is a name for a specific stand-alone BEC made by Kool (Ultimate BEC) who were the first to market such a device, in March 2002. Other people, such as Novak, subsequently made similar devices and marketed them as Universal BECs, hence the confusion. (Source: What is the difference between a UBEC and an SBEC and just a BEC? and what is the difference between an in-BEC, out-BEC and UBEC?)

SBEC is a better term to use when referring to SBECs/UBECs as UBEC (whatever the U stands for) is a brand name and SBEC is more accurately descriptive.

See also WHATS a UBEC and Who Needs Them?, which contains the following information, taken from 3 amp Universal Battery Elimination Circuit (UBEC):

This 3 amp Universal Battery Elimination Circuit (UBEC) is a ‘switch mode’ DC regulator that takes the high voltage (up to 21 volts) of the main battery pack and converts it to a consistant and safe 5 volts for your receiver and servos. A UBEC is needed if the Electronic Speed Control (ESC) being used for the motor does not have a built in Battery Elimination Circuit (BEC), or if the BEC of the ESC is inadequate to power the number and/or size of servos being used.

Using this UBEC is a safer way to go on large models for the following reasons:

1. Most built-in BEC circuits are 1 to 2 amp ‘linear mode’ circuits which are only useful for 2 or possibly 3 standard size servos when using a 3 cell Lipo battery. If you use more servos, or a higher voltage battery pack, you will almost certainly overload the BEC, causing a crashed model.

We make it easy to connect a UBEC!  Using a T-Plug BEC/Lighting Tap with JST Connector(sold separately), you can install the UBEC inline with your flight battery and ESC power leads — no soldering required.

Special note:
If the ESC being used has a built in BEC, that BEC must be disabled when using a UBEC, as you should have only one power source providing power to the receiver. To disable the BEC of an ESC, simply disconnect or cut the red wire on the receiver plug of the ESC.
If you are certain that your ESC does not have a built in BEC, then do not disconnect the red wireof the receiver plug of the ESC (if it has one). Most ESCs that do not have a built-in BEC say “OPTO”somewhere on the label.

An Electronic Speed Controller, or ESC, is a controller for brushless motors. They control the flow of electricity into the electromagnetic coils inside the motor in such a way that the motor shaft is made to turn. ESCs are used to control the rotational speed of brushless motors. See the ESC guide, Quadcopter ESCs (Electronic Speed Controls) » Odd Copter.

Setting up the power system for a multirotor using Opto ESCs goes like this:

There is also the SmartBEC:

The SmartBEC adds the benefits of a switching BEC and a lithium-aware LVC to your flight system. It is a great choice for anyone looking to upgrade their non-lithium aware system to use higher voltage lithium batteries.

SmartBEC features a soft lithium cutoff, so you don’t have to worry about making an emergency dead-stick landing. When the battery is nearly depleted, the power output of the motor is progressively scaled down. Once the plane begins to feel sluggish, its time to set up for a landing.

SmartBEC uses a switching type power supply to efficiently convert high pack voltages into the 5v your receiver and radio gear needs. A switching BEC does not become grossly inefficient when used from high voltage sources. Because of this you will not need to fear losing radio power from a BEC shutdown. Adding a SmartBEC will allow you to stop carrying around a second receiver battery, often saving several ounces of weight. SmartBEC supports up to four standard servos or six sub-micro servos, so the majority of sport and parkflyer type aircraft are suitable. It puts out almost no EMI, so you can use it without fear of glitching.

The SmartBEC installs between your ESC and receiver, so you don’t have to modify your speed control to disable its internal BEC, just plug it in. SmartBEC works by modifying the throttle commands sent to the ESC, so if the ESC has low voltage cutoff settings, they will still be active. Whichever LVC occurs first (ESC or SmartBEC) will take precedence.

SmartBEC is not directly compatible with opto-isolated ESCs. A small modification is required (see below).

For best results, ensure that the SmartBEC is installed at least 2 inches away from your receiver.

SimonK is generally accepted as the optimum firmware for an ESC. 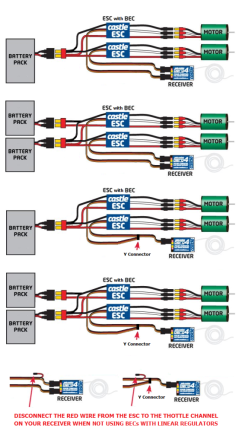 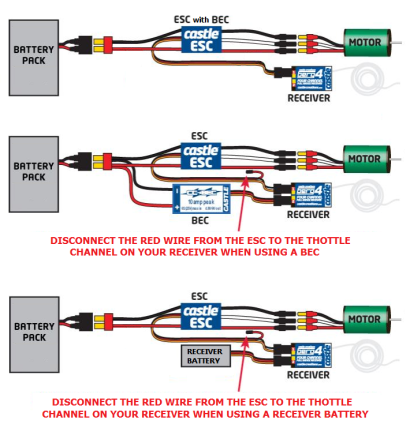 One thought on “BECs and ESCs”