My fridge/freezer in my BKK apartment died. Possibly because I shifted it while it was on, possibly because it was old when I bought it, or it just overheated in this sweltering heat, that we have been having lately.

The fridge is an Electrolux ER 2290 D. The issue appears to be the compressor not starting, or continuing to run (if it does start). It can heard buzzing, and sometimes, it will start, but then stop running shortly afterwards. Various clicks can also be heard, as if it is trying to start, but it just doesn’t get enough of a “power kick” to actually start.

The title of this next video, seems to accurately describe the issue that I am experiencing.

There are two sizes of Universal starter packs (AKA 3 in 1 starter):

It also mentions the usual positions of the three terminals:

This next video is useful for the five most common refrigerator issues.

Taken from the back of the fridge

What is strange with my fridge is that the compressor connector (see below) is only two pins (Start and Run), en lieu of the usual triangular three pin connector, with only the Run connector being connected, by a black lead coming from a Nakagawa NT0704M2MC, which appears to be a defrost timer. The Start connector is unconnected.

The Common pin is connected to a component with three terminals, manufactured by MRKK, part number MM3-20GCA 9254, with a red lead, coming from the NT0704M2MC, going to terminal 1, and terminal 3 being connected to the compressor’s Common pin. Terminal 2 is unconnected. The MM3-20GCA is the overload protection, as seen in the circuit diagram (above).

Upon further inspection, and comparison with the circuit diagram, it appears that the two pin compressor connector, with only one lead attached to it, is correct, and is the relay, made by Hitachi. It is probably this part that requires replacing. Upon it is embossed “S-3” and “>UP<“. The two sockets that correspond to the Start and Run terminals are labeled 3 and 2 respectively, with terminals 1 and 4 not having any actual pins to connect to.

I located this part in a backstreet shop, where the chap said he had one and that it would cost 300 baht. However, he then proceeded to, inexplicably, lose his temper, and said that it would cost 400 baht, if I thought about it. So I left him to his own musings, minus the potential 300 baht that he could have made.

The resistances, between the compressor terminals, are:

After about a week of searching the local shops (I had encountered a filthy shop owned by a drunkard who tried to aggressively sell me a second hand replacement for 300 baht, whilst angrily telling me that if I left and then, later, returned the price would go up to 400 baht. Needless to say, I did not purchase the item from the gentleman), I located a replacement relay in this shop, near the corner of Pracha Songkro Soi 25, which is run by a very personable, and energetic, lady

The replacement relay was not an exact match, being a JAHWA 220MD2 / KV126, but close enough 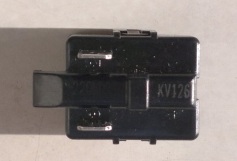 However, after getting it home and testing it, while the new relay/connector works (the compressor started up fine but slowly died after about a minute or two of operation – the same as it did with the original Hitachi relay), it appears that the compressor is broken, rather than the associated control circuitry. The compressor does get incredibly hot, during the few moments that it runs, indicating a catastrophic failure.

The lady in the shop also appeared to have doubts that the original relay was broken, as it did/does not rattle when shaken.