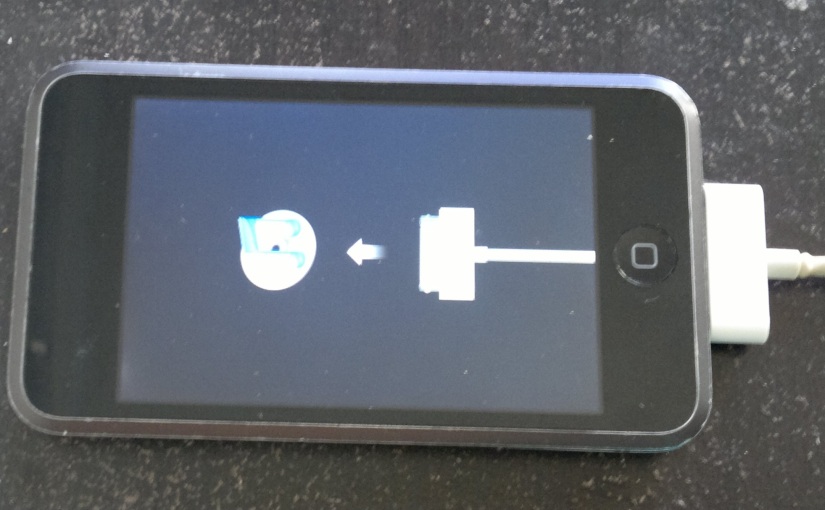 I purchased an iPod for 300 baht, in the market (Talat) in Pracha Songkro, Din Daeng.  The vendor warned me that it did not work (“Mai Dai”), and, when pressed further, he stated that there was a problem with the Firmware. When the power button was pressed the screen lit up with the Apple logo and then was promptly replaced with the “Connect to iTunes” logo (i.e. the iPod was in Recovery Mode).

Regardless, I purchased it and took it home.

Note error 1 is not to be confused with error -1, which is related to a corrupted baseband IC.

Upon  connecting to iTunes, iTunes stated that the iPod needs restoring, and so I clicked “Restore iPod…”, and then “Restore and Update”, “Agree” and “OK” on the respective dialogs and iTunes downloaded the update. It then extracted the update (“Extracting software…” progress bar at the top ofthe iTunes window) and then promptly returned the error:

The iPod “iPod” could not be restored. An unknown error occurred (1).

Clicking on the More Information button, took me to the useless If you see an error when you update or restore your iPhone, iPad, or iPod, although clicking on the link at the bottom of the page

If you tried these steps and get the error again, follow the steps for your error code.

led to the more useful Get help with iOS update and restore errors. However, it still ends up saying the same pointless information, “update your iTunes and OS, blah, blah, blah”.

Putting the iPod into RFU mode gave the same error 1.

Moving to the PC, I initally found that Windows could not install the USB drivers (possibly because the iPod was in recovery mode), and that it was necessary to install iTunes first – the link, Apple Mobile Device Driver Missing Under Device Manager, was useful in that respect, whereas TS1567 install apple mobile device to recovery mode? was not so (although it did mention that they were two drivers – could one be for DFU mode?). iTunes installed the drivers to

Once that was done, and after disconnecting the USB cable and reconnecting, the driver (iBoot) was installed correctly.

Only to be replaced a few seconds later with the iBoot driver again,  once the OK button is pressed in iTunes on the “Recovery Mode” dialog (note that usually this dialog does not appear and iTunes just goes straight into the Waiting for iPod progress bar dialog) and then after iTunes went through its “Waiting for iPod” progress bar dialog a couple of times and then displays again the “Recovery Mode” dialog:

At which point the iPod will no loner be showing the blank screen, and instead the connect to iTunes screen.

Another thing that I noticed, on both the Mac and the PC was that the Serial Number was not available in iTunes, when the iPod was in Recovery Mode:

but was available in RFU mode.

From the link, iPod Touch 2G iOS update: long overdue. Help?, as well as the PhoneWiki, TinyUmbrella was suggested to kick the iPod out of recovery mode.

TinyUmbrella managed to give me some data:

but it was not able to get the iPod out of recovery mode. It was TinyUmbrella that told me I had a first generation iPod though:

It seems that error 1 is a mainboard error, not as suggested here that error one is an upgrading/downgrading error, and could most likely have been caused by a defective power supply, or water damage.

The following day I went to Fortune Town, firstly, to a third party repair shop where the chap was unable to repair it and as it is a first generation iPod he has no need for it as parts as so few people need one repaired.  I then went to the Apple store, where the guy ran through the update process and informed me that it was unrepairable.

I suggested that I could try using a heat gun on the mainboard, but the chap at the Apple Genius bar said that as the iPod has no screws it can not be easily opened, and any attempt to do so will probably break the screen.

My best bet seemed to be to go back to the market and try to get my money back, or exchange it for something else. Which I did… and the bloke, predictably, refused to give me a refund, although he did, rather helpfully, open the iPod up for me, using just a box cutter blade to prise the sides of the case away from the screen (disproving what the guy, in the Apple store, said about the screen cracking, upon any attempt to open the iPod):

It came apart rather cleanly, although the Wi-Fi antenna was loose and needs to be gently rested in its seat, which is around the top left corner.

Here’s how to enable DFU mode on your iPhone, iPad or iPod  Touch:

Step 1: On your PC or Mac open iTunes. Then, with your iPhone or other iOS device turned ON, connect it to your computer using its USB cable.

Step 2: Press and hold BOTH the Home and Power buttons at the same time.

Step 3: When your iPhone turns off completely, release the Power button BUT KEEP ON PRESSING the Home button for 10 more seconds. The screen on your iOS device should remain blank at all times.

Step 4: On your PC or Mac you should see a pop up on iTunes saying that your device is in Recovery mode and has to be restored. This indicates that your iPhone, iPad or iPod Touch has successfully entered DFU mode and is now ready to be restored.

After this, you should click OK and restore you iPhone using the Shift+Restore method.

Note: It might take you more than one try to get your iPhone into DFU mode.

From How to bypass error 1 in iTunes

So here is what you need to do. Grab your device and plug it into iTunes. Then press the power button (the top right button) for three seconds.

Then while holding the power button, hold the home button for 10 seconds.

After 10 seconds let go of the power button while still holding onto the home button. Do this for 10-15 seconds or until iTunes pops up with a display saying iTunes has detected an iPhone in recovery mode. (I know I said we don’t want to be in recovery mode but trust me, your not in it, iTunes just doesn’t have a prompt for DFU mode.)

And voila, you should be good to go and no longer receive iTunes error 1.

From the comments of How to bypass error 1 in iTunes

Have you tried kicking it into recovery mode?