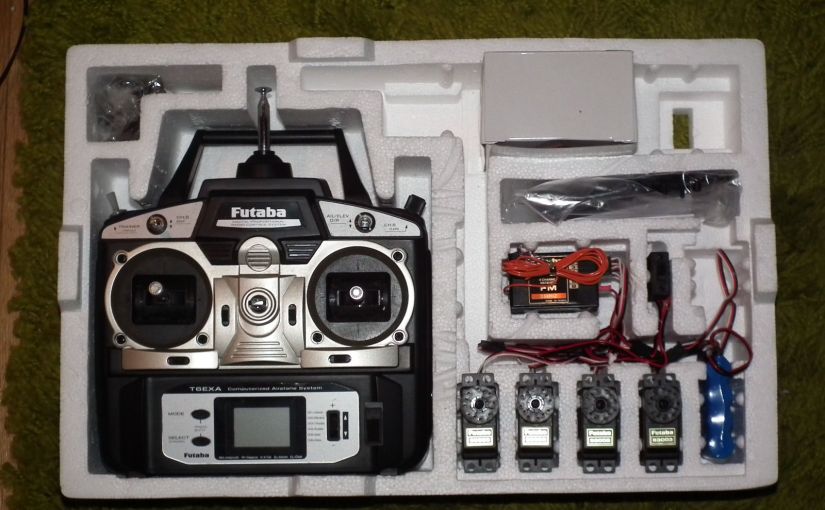 I need to buy an RC transmitter and know nothing about them. All I know is that I want a fairly good one, budget, versatile and which can be used with drones, planes, boats and robots/crawlers.

What to look for – RC Transmitters explained

This article, How To Choose RC Transmitter For Quadcopter, is excellent and takes you through the various facets of RC transmitters.
Also worth a read is What RC Radio/Transmitter to Buy…, which promotes Futaba, JR and Spektrum transmitters, as well as mentioning Graupner and Hi-Tec. The article also goes into channels and modes:

Don’t scrimp on channels.  Each channel allows one individual function on the aircraft to be controlled.  Most UAVs require at least 4 channels or more, often 6+ for core features. (pitch/yaw/roll/throttle, flight mode, advanced IOC flight modes,  return to home, retracts, etc).  The minimum we suggest is 6 but ideally 8.  When adding in a camera and gimbal to the mix this can quickly grow further (shutter, pan, tilt, roll, gimbal mode, etc).  For a single operator setup with camera you would want a minimum of 8 channels for the core functions, and ideally 12+.

Lists of the best

Note that there is a difference between X9D and X9D plus. From TARANIS X9D vs. XD9 PLUS:

There is a built in transmitter built in to the Taranis, which can not be removed. This module is an XJT, see X9D vs DJT & XJT?:

So just to clear this up for future readers, the module built into the Taranis IS an XJT.

It is possible to add a second transmitter module (DJT or a second XJT) to the Taranis, using the bay at the rear of the module, to provide additional channels. Taranis X9D how to use all 16 channels:

Set the Taranis to output channel 1-16 in the setup menu.

Set the X8R to mode 4. This will output channel 9-16 on conventional channel pins (PWM). Connect the Sbus to Naza to SBus and it will receive channel 1-8.
Connect your lights, camera, … to channels 9-16.

Note: The Turnigy 9X (not 9XR) is just a rebranded FlySky TH9X (see below for the TH9X). See Benefits of buying FlySky TH9x (v2) over Turnigy 9x (v2), which also compares 9X, 9XR and 9XR Pro. It is possible to upgrade a 9X, see Upgrade Turnigy 9X with FrSky DJT Transmitter module and binding receiver.

How to support more than 9 channels (PDF: morethan8channels9xrpro, link).

From Futaba Radios Is one brand truly better than the rest?

JR’s first DSM2 radio is based on the incredible JR PCM9X II which utilizes the old 35MHz or 40MHz or 72MHz frequencies. People who have the old JR PCM9X II owners  can easily upgrade to JR DSX9 by simply buying an upgraded module.

What do we really think of the new $99 Turnigy 9XR Pro?

However there’s a couple firmwares out there that are all customizable. Er9x and 9xCompanion, probably a couple others..

This is the first video this Russian guy put out, after watching the video it becomes quite clear how lacking the orignal firmware is… lacking isn’t the correct word, the correct word is CRAP.

For what I use the controller for 95% of the features are not necessary like mixing, curves and really WAY advanced mixing… However if you have a airplane/glider/heli this thing is dope!

Question about R/C control for Hexapod

There is a touchscreen transmitter, Turnigy 10 channel transmitter with touch screen and FSI-10, but it is not highly rated, from 9xr pro or TGY i10:

9XR Pro any day of the week and twice on Sundays. No contest. If you go with the i10, you are stuck with what you get.

This is, more or less, the same as the Turnigy 9X, a very cheap transmitter, which is the precursor to the 9XR and 9XR Pro, but it is possible to upgrade it, see Upgrade your FlySky TH9X to the FrSky DJT module. Also, Oscar Liang’s Upgrade TURNIGY 9X WITH FRSKY DJT TRANSMITTER MODULE AND BINDING receiver.

For the 9X, see What to get? Please point me in the right direction

Note there are DJT, DFT and DHT depending on the fitting, with the middle letter denoting which fits which transmitter, see FrSky TX Modules:

This is the Frsky DJT module fits Turnigy 9x etc to enable use of quality receivers from Frsky including D4R-II etc which can run ppm and many other advantages over stock Turnigy module better range and better signal. Simple swap over remove the Turnigy module and slot this in.

There is the superior XJT which supports V8-II, D8, LR, and X receivers (from the XJT product page). From What Receivers work with the Taranis

See 9XR-PRO and FrSky XJT module – Telemetry – Mod or not?

The 9XR-PRO is already prepared to accept the XJT module.. But you will need to update the firmware to the latest ersky9x.

From FrSky XJT vs DJT – what is the difference?

You will need the XJT module (or a Taranis) in order to use the L9r long range receiver. The range gain is not achieved by boosting the signal, but by changing the protocol. L9 is a one way protocol, no telemetry. It also has fewer channels to transmit. These two factors mean that they will transmit a much lower data rate and that lower data rate will allow the same power level signal to be reliably received over a longer distance. This is basic data transmission theory.